The largest flood project ever undertaken in Ipswich will chart the way forward for the city’s response to future flooding events, and fulfils a key recommendation of the Queensland Flood Commission of Inquiry.

Ipswich Mayor Teresa Harding said there are 68 recommendations in the Ipswich Integrated Catchment Plan (IICP), council will be working to build Ipswich’s readiness and resilience for future floods.

“Flooding is an unfortunate reality of life in Ipswich. We know that flooding will happen again, and when it does, we want a city that is informed, ready and resilient,” Mayor Harding said.

“This plan takes a holistic approach, recognising the most effective way of building flood resilience is to integrate the full spectrum of flood risk and catchment planning.

“We’ve made sure to listen to the community, by undertaking a community engagement process, we’ve ensured the people of Ipswich were involved in the development of our city’s plan.” The outcome of the IICP is an in depth and detailed technical evidence report supporting six chapters of work across: land use and planning; physical mitigation; community awareness and resilience; emergency management; property specific actions; and current and future flood risk.

Environment and Sustainability Committee Chairperson Councillor Russell Milligan said the IICP is a culmination of over two and half years of work across multiple departments and feedback from hundreds of residents.

“Understanding the whole of the catchment and how a river interacts with the land makes for better results from both flood and waterway health perspectives.

“Past disaster events have shown the human and social costs of flooding can be just as significant as the more tangible costs of building and infrastructure damage.

“This plan addresses the wide range of impacts with a flooding event.” 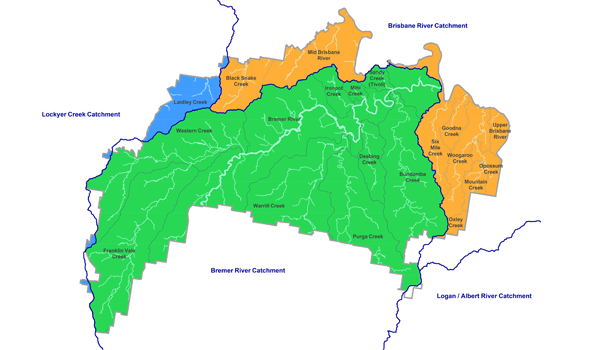 Catchments within the Ipswich region include the below. Management Plans have been developed for these relevant waterways.

The IICP fulfils a key recommendation from the Queensland Flood Commission of Inquiry.

It builds on important regional flood studies, previously completed in collaboration with State Government and other local councils.

The IICP goes above and beyond the Commission’s recommendation by adopting an approach that integrates flood risk mitigation with other elements of catchment management such as water quality.

“The IICP will guide council’s actions and future investment and chart the way forward for the whole city,” Cr Milligan said.

>>> Join a Community Panel and help shape the future of Ipswich